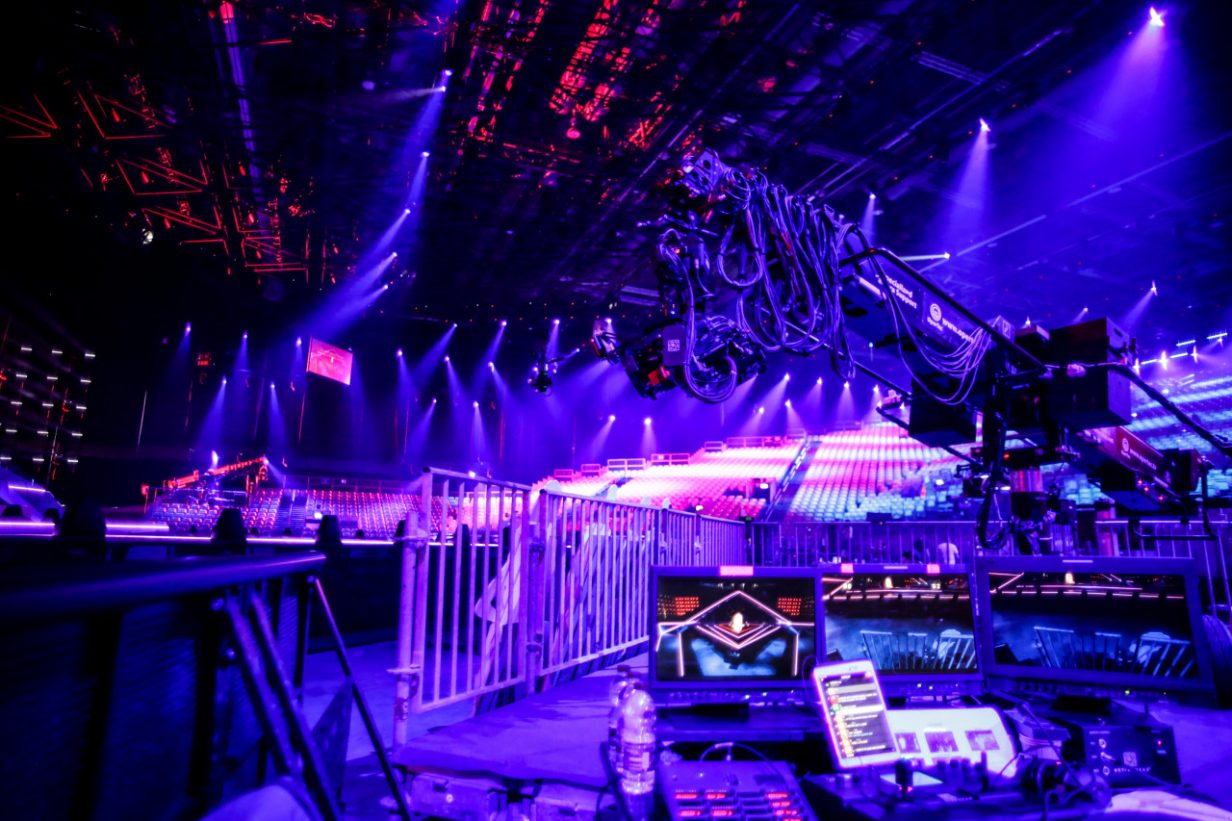 The first round of rehearsals on the Eurovision stage for Semi-Final 2 are now over, with all 18 acts having had their 30 minutes to run through their performances to see if vocals, dancing, special effect, camera blocking etc were all working as they should, and the results for the viewers watching were as envisioned. For some it seemed that only minor polish is needed, where as other might have to work over time to get things in order for the second round of rehearsals later this week.

The first country to rehearse for Semi-Final 2 was Armenia, with Srbuk solo on the stage in a short black dress and long black boots. The LED backdrop showed various different images, for a kaleidoscope effect with hands, to patters that looked like the screen was malfunctioning.

Ireland was next on the stage, with a performance that could best be described as something our of the mid-1990s movies Clueless inserted into an American diner setting from the 1950s-60s, and a LED background made up of pop art. Interesting elements all on their own, but none of them feels like the right fit for the song.

The duo, turned quartet, of Carousel from Latvia then took the stage, with a performance that has the same jazzy vibes as the song itself has, in full colors, the black and white from the national selection show gone. Sabīne gives a Norah Jones-esque performance, with the rest of the band looking like they might as well be playing in an intimate smoky jazz bar, or judging by the background, out in the open, under the moon and stars.

Luca Hänni from Switzerland was up next, dressed in all black. He started of all alone on stage, until the chorus where was joined by two male and two female dancers, so the dirty dancing could really commence! The background seemed to be experiencing some technical issues, unless the glitchy look was intentional. Hopefully this will be fixed before the next rehearsals.

Moldova was up next, with Anna Odobescu taking the stage in a white bridal looking dress. She was accompanied by a sand-artist, who was illustrating the song in real time using sand, or in this case something resembling snow, and shown on the background and the floor during the performance. This is the second time the sand-artist Kseniya Simonova performs live on stage, she did so as well for the Ukrainian entry Angel in 2011.

Ester Peony from Romania took the stage, with a performance that was very close to her music video, though with two male dancers accompanying her on stage instead of female dancers. She also had two backup singers and a guitarist on the bridge leading to the stage, for a full ensemble of six people. The background showed an underwater archway, that later in the performance caught fire, aligned with a pyrotechnic flames shooting up all over the stage.

Leonora from Denmark was up next, using a similar performance from the Danish selection show. With the images reminding you of a child’s play room, with the giant chair standing in the middle of the stage, and a LED background of clouds, hills and a giant sun. Leonora is accompanied by four people on the stage this time, with her two backup singers already sitting on the giant chair as Leonora climbs a ladder to reach them. Overall, the the performance still have the sense of innocence about it, that is also present in the song.

Pænda from Austria was next on stage, with her distinct blue hair… yet we didn’t get to see it in the beginning, as the performance started in black and white. She was alone on stage on a tiny podium, with a background of silvery running lights, that look like a forest of just think tree trunks.

Sweden closed of the day, with John Lundvik on the stage, backed up by the amazing Mamas. They all had such a palpable chemistry, that could be felt across the stage and though the screen. The staging was otherwise simple, with the LED screen behind them flashing in copper colors, highlighting the warm feelings radiating from the people on stage.

Croatia was the first rehearsal of day two, with Roko stage and center wearing golden angel wings, accompanied by two guardian angel backup dancers, to a heavenly backdrop and the backup dancers (or rather a recording of them) flying around among the clouds.

Next up was Malta, with Michela Pace on stage backed up by a group of singers and dancers, in a fun, colorful and color-changing performance that really lives up to the name of the song, Chameleon! The first run through saw some minor issues that we’re sure will be fixed in the days to come. These are the kind of issues these first run throughs are there to weed out!

Next it was time for Jurij from Lithuania to get on stage and rehearse, and the performance have a resemblance of the one from the Lithuanian selection show. Jurij is still alone on stage, with golden dots in the background, but they are now in a greater extend used to produce imagery, anything from people partying to a giant eye.

A little over noon, Russia‘s Sergey Lazarev took the stage, to great expectations from everyone. And what is better than one Sergey on stage… nine Sergeys! The staging has some similarities to what we saw in Stockholm in 2016, where we saw his animated shadow, though this time it’s not just a shadow, but eight clones (pre-recordings) of Sergey standing, emoting and singing side by side with him. Though the message of the performance is strong, unfortunately the similarities with 2016 makes this performance kind of feel flat, as comparative it goes nowhere. What follows is Sergey singing in a box surrounded by rain, while his clones scream.

Albania was up next, with Jonida Maliqi on stage wearing a black dress with metallic adornments. While Jonida’s vocals were on point for the rehearsals, the same cannot be said about the technical aspects of the performance. There were visible changes between the run-throughs they managed to go through in the 30 minute rehearsal window they had, so what we will end up with next week at Semi-Final 2 is still unsure.

Next up was Norway. Unlike in the Norwegian national selection show, where they were surrounded by dancers and percussionists, here the three artists from KEiiNO were standing alone on a misty stage, with a backdrop of an animated snow and ice covered landscape and pyrotechnics to boot. Overall really invoking the sprits in the sky on stage.

The Netherlands were next on stage, with Duncan sitting alone behind a piano bathed in blue lights, reminding a bit of an underwater scene from the music video. Unfortunately the same powerful feeling that the music video invokes in you, did not come across from the first rehearsal. Though Duncan sounded really great, hopefully they can fine-tune the performance to bring it to the level it needs to be, to be worthy of being the the current front-runner.

It was then time for North Macedonia to rehearse, with Tamara Todevska standing on stage in an emerald green dress, accompanied by mirrors of herself in the background, drawing some comparisons to what Russia had just shown a few hours earlier when Sergey was on stage. On the LED background images of proud women were shown, end with a picture of Tamara herself together with her daughter. Overall, Tamara delivered a fantastic performance in her rehearsals.

Final act of the day, and final act of Semi-Final 2, was Azerbaijan. Like with some of the previous acts, there had been various speculation on what the stage performance would be like, but I doubt anyone had guessed two robots using lasers to stitch together a beating heart projected on Chingiz’ chest! The overall staging were amazing, and the addition of mugham gave the song a very nice tie to Azerbaijan and traditional Azerbaijani music.